We start off this years O-Ringen at Arena Pattons hage close to Hågadalen, just 15-20 minutes with bike from O-ingen city. The first stage offers extended middle distance in city adjacent Upplandian wilderness in the Nåsten nature preserve. The terrain mostly consists of old pine forest with small hills and marshy areas. The relatively flat terrain is rich in detail and often technically challenging, with variable character.

All but the shortest routes pass through areas with sparse old pine forest, stone slabs, and marshes. In the western parts of the map, reached by the longer routes, there is terrain that is both physically and technically challenging, with more boulders and shorter lines of sight.

Close to Hågadalen and the arena there is a rich network of trails. Many of the trails are, however, small, and hard to follow and cannot always be used for guidance. The trails can also be technically challenging for runners, with many roots and stones. The routes finish via the meadows in Hågadalen and the slope down towards Hågadalen is relatively steep. Here the trails can become crowded, so be careful and considerate.

Generally speaking, accessibility is good with a few green spaces. Many of the marshy areas are overgrown with wild rosemary among other things. This can affect the running speed. There is also plenty of rocks around, especially in the western parts of the area. There are windthrows in the area, due to spruce affected by engraver beetles. Single windthrows are not shown on the map, but areas with several are marked.

The road to the start is mostly easily accessible, consisting of paths, road and arable land. To the starts Alewalds, Bagheera, SLU, Suzuki and Ormsalva, however, you pass a section with about 400 m small path and forest terrain and 25 m ascent. 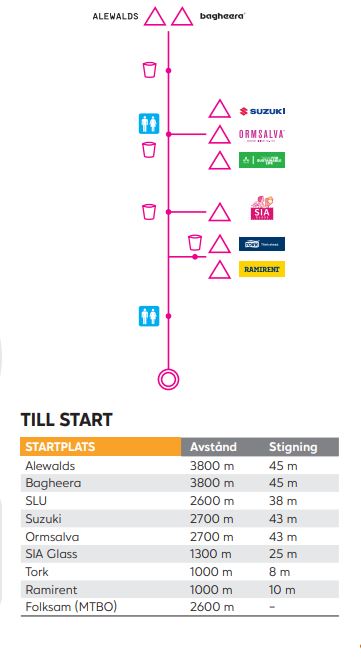